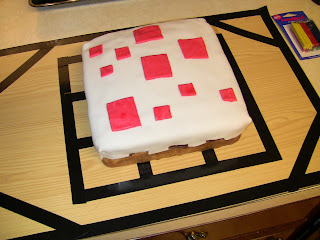 CAKE
In the computer game Minecraft, players can craft a cake if they have a crafting table and the right ingredients.  In order to make my son's birthday cake for his Minecraft party, we first needed a crafting table! We made ours by adding electrical tape to a flat wooden cutting board. 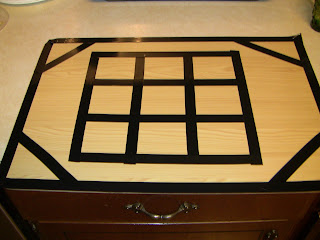 I iced the top of one, but not the sides. Then I added the next layer and iced both the top and sides of the top layer of cake so that fondant would stick to it. Look at the picture below to see me 'crafting' a cake on the 'crafting table'-- when virtual life becomes geeky reality! 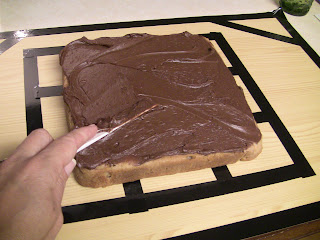 I added uncolored fondant to the top layer and used kitchen scissors to cut the edges. I had tried lining up the fondant and pre-cutting the sides, but then found it was just SO much easier to put the fondant on top and cut it to shape. Finally, I added some red dye to a little leftover fondant and added the squares.Wetting each square helped it to stick to the white fondant.

SNACKS
We were planning on having watermelon anyway, but once I got into my Minecraft-mindset, I was seeing Creepers and pixelation everywhere... 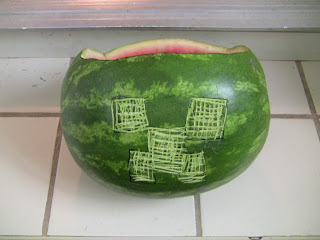 (That is a Creeper face, if you can't tell!) My son drew the face for me and I etched into the melon rind with a knife. We made melon balls to fill the rind and the boys loved saying they were eating Creeper brains. (Did I mention that the boys are 12? Could you tell?) 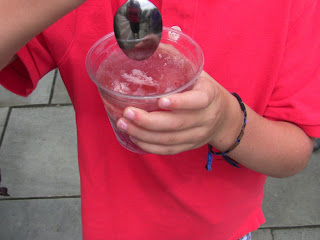 Another snack also acted as a game for the party: Digging for Diamonds!
Starting a few days before the party, we put plastic 'diamonds' in the bottom of several plastic cups. We added a different color juice or soda every day. On the day of the party, each boy got a cup that held several colorful layers of ice. You see, in the game Minecraft, one way to gather resources is to dig. (I guess that is why they call it Mine-craft!!)
We had a race to see who could mine the diamonds fastest. 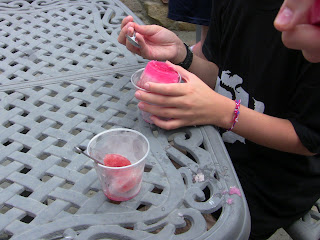 CUPCAKES
After the kid party, we had our guests' families join ours for dinner and more fun. For that
'after-party party' I made cupcakes, or "cut cakes" as some people call them.
When I first started Googling 'Minecraft party', I was inspired by the Creeper face cupcakes I saw on many blogs and Pinterest sites. 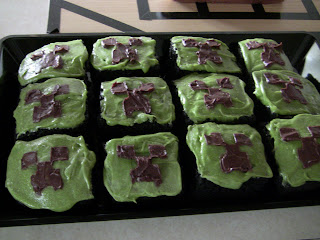 A good friend who would be at our party has food dye intolerance, so we tried to make sure he'd be able to enjoy the party foods as much as anybody else.  The sodas and juices we used for the Digging for Diamonds snack used natural coloring, and the Minecraft cake had only a few spots of red dye that were easy to remove.  These Creeper cakes presented more of a challenge.
Thanks to the amazing Internet, though, I found my new best friend: avocado icing!
It sounds gross, but it was the hit of the party.  Believe it or not, the avocado icing doesn't taste at all like avocados or guacamole (which gets most of its flavor from garlic, after all!). Instead, the high fat from the avocado makes a fantastic butter replacement and the green color can't be beat! It stayed bright green for days, too.
I found my inspiration recipe from Alton Brown, but after looking at several variations on the web and experimenting the week before the party, I learned that adding some vanilla, lowering the amount of lemon, and halving the amount of avocado gave the best results for what I wanted.
My Creeper cakes aren't the most beautiful things in the world (if you want those, try Candy Bar Cupcakes' method--they are fantastic looking!!) but they were quick to make and our guests ate them ALL.
I used a favorite chocolate cake mix, baked in a glass baking dish. When cool, I cut them into equal squares, iced them with the avocado icing, and decorated them with leftover chocolate icing from the Minecraft cake.  I cut a plastic yogurt lid to be my template (see picture below) and smeared the icing with a spreader. The green icing needed to set for several hours before adding the chocolate icing. 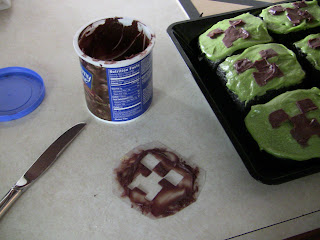