We've been busy--throwing a Cowboy Birthday Party for N, who turned five last month.  The cowboy theme was his idea, and I was surprised at how little there is out there for small cowboys.  It seems that if a birthday theme is not commercial, you won't find tablecloths and matching cups for it anywhere local.
So we did the best we could!  Once N came up with the idea, I searched my house for related items, asked people I know to search around their homes, surfed the web and local stores for more ideas, and then tried to adapt party classics (pin the tail on the donkey, for instance) to fit our theme.  One web site I find particularly helpful is BirthdayPartyIdeas.com. 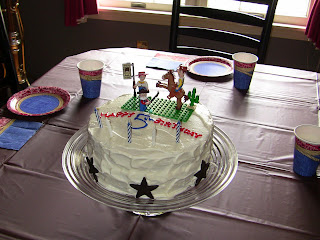 The only cowboy items I found to purchase were the plates, cups and napkins in the 'western' theme, pictured above.  We used a Toy Story cowboy Lego set for our cake topper, but otherwise tried to stay away from using too much Toy Story. 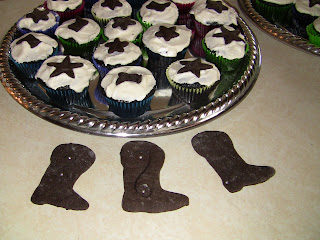 We used star cookie cutters for the cake and the cupcakes, above, and my mother was clever enough to realize that if we used a Santa boot cookie cutter in May, it would look just like a cowboy boot! I used a toothpick to draw features on the boots, throwing on the occasional silver ball for decoration. 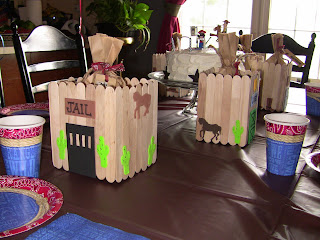 The craft store had foam western houses (for $7 each!!), so I adapted the idea.  I purchased western foam stickers (much cheaper!) and some craft sticks (even cheaper!).  I covered tissue boxes with the craft sticks, made doors and signs for each one from a large sheet of foam, and let the kids decorate the houses as an ice-breaker activity at the beginning of the party.  The houses served as place markers and goody bag holders. (Goody bags were just brown paper bags tied with twine and a bit of bandanna. Inside, guests would find candy, a small toy snake, a bison tattoo donated by a local bison farm, some playing cards, and whatever goodies the cowpokes earned throughout the party.) 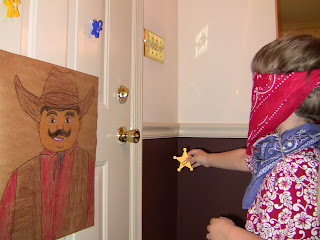 For our party, we made up a wanted poster for RattleSnake Pete, wanted for scattering rattlesnake eggs all over the ranch. The kids went in search of RattleSnake Pete, starting with earning their sheriff badges in a game of "Pin the Badge on the Sheriff".  From there, they had to pan for gold (pennies and gold rocks from the craft store floral aisle) to get money for supplies. Panning for gold required a snack break, so we dined on Corn Puffs, which look a lot like golden nuggets.
The first supplies needed were horses! 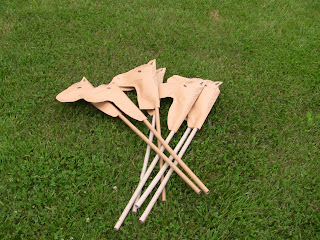 To get a horse, each cowpoke had to lasso a horse with a hula hoop. 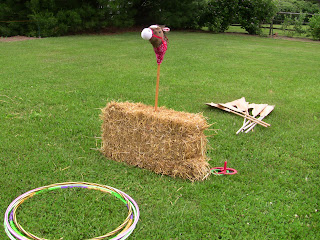 The kids also played horseshoes at this area.  From there, the cowpokes needed guns, and to earn a squirt gun, they needed to take target practice.
[Just for the record, I have long been an opponent to guns in the house.  I caved on this stance for this party for several reasons, and I'll be honest and admit that one of those reasons is the fact that N is my youngest and I just don't feel like fighting an uphill battle anymore...my boys were born making battle noises and will turn anything--sticks, ribbons, noodles, grass--into guns.]
For target practice, the cowpokes needed to squirt a hole in the tissue paper target, which was fun to do with a squirt gun. 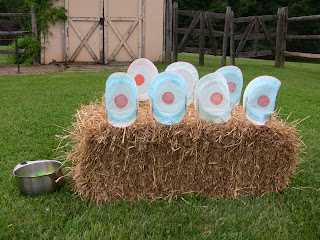 After target practice and some horse riding, we played There's A Snake In My Boot (based on the saying of Woody in Toy Story, when his string is pulled). I made a boot from an oats container and the cowpokes took turns throwing plastic snakes in the boot.  Winners (everyone's a winner!) got gummy snakes for a snack.
The kids followed the trail to an area of the lawn where rattlesnake eggs were hidden everywhere (yes, I had to take out the Easter Eggs that I only put away a month before!) and found a large stuffed snake...Rattlesnake Pete was a real snake! Well, that put a new light on this 'criminal'.  No wonder there were snake eggs!
But since we can't have a dangerous snake at a party, the only solution was to confuse the snake and head it in the other direction.  We did this by playing 'hot potato' with the snake until it got dizzy and looked like it would leave us alone while we ate cake and ice cream. 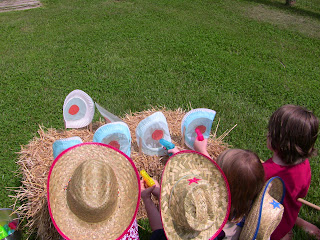 I am thankful to my older children for helping to lead the small children through all the activities.  I am also thankful to my parents who supplied the hula hoops and many other party items.  : )
Posted by S and family at 8:47 PM